A QUOTE FROM A PIONEER AND A REACTION

“I believe that art has a moral responsibility, that it must pursue something higher than itself. Art must be a part of life. It must exist in the domain of the common man. It must be an enriching, ennobling and vital partner in the public pursuit of civilization. it should be a majestic presence in everyday life just as it was in the past.” – Frederick Hart
. Wasn't ever really interested in an I'm ok your ok approach to art. .. And Mr. Hart's statement really spells it out nicely to rise to the occasion. What I like so much about what he said is that there is a common denominator to all of us.. And even that, when recognized is something of wonder and amazement... Art needs to be treated as a sacred object and when it's ironic or ugly it just feeds into a less than victim-like existence rather than one of empowerment. Mr. Hart was a pioneer in a time when the figure had been completely rejected by most academics and critics.. I find him to be a voice of reason in an art world that truly misses the point. This man had courage and heart!
I also wanted to mention that there is unprecedented interest in the Leonardo Da Vinci show at tThe National Gallery in London, where entrance fee is 16 British Pounds.. People are paying up to 400 Pounds just to see it.. Now I'm not saying that it's because it's Renaissance Art that it is drawing such intense interest.. Rather it's because humans cherish belonging to something greater than themselves and something that is so clearly of tremendous value and consciousness.. Who the hell wants to belong to something reminiscent of crap! Time to rise to the occasion..
I look forward to the Book Launch - Sculpture Show- Press Conference this Friday at the INSTITUTE FOR CLASSICAL ARCHITECTURE AND ART.. And I hope you will join us!
Take the sculpture off the floor and show us what can be.. 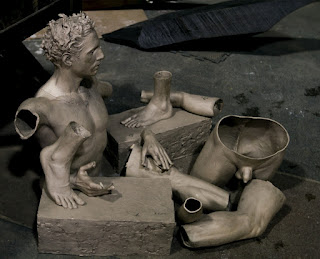