Why I decided to be a sculptor 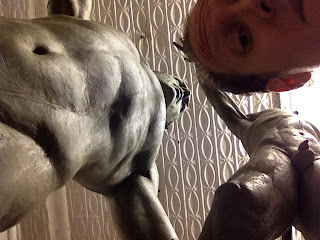 What made you decide to be a sculptor?

I grew up in the visual splendor of Italy surrounded by beautiful art juxta posed with the urban hotbed of ideas that New York City was in the 60's and 70's..My childhood was a marriage of traditional beauty and modern concept of self expression.. Both my parents were PHD.s so I was expected to go that way as well.. Well as a rebellious teenager I followed my parents in Italy from one cultural sight to the next, and so it slowly creeped into my soul that art was something of immense grandeur full of grace and nobility.. It was a world that aspired to the divine or sacred exemplifying man as the best that he could be. I knew that art was something that was a learned skill that left a viewer mesmerized by it's power. On October 19th at exactly 4PM. lightning struck. I had just been hired at a cabinet makers shop in South Philly (Guido Central) on Monday , and now it was Thursday.. I couldn't take it any more. My parents were right. I was not using my god given gifts. Specifically my brain. I strode over to the boss and stated succinctly," I quit!".. His response was," What'du mean, you quit?.. I just hired you.. Well I 'm not going to pay you." My response was," Ok well what do you owe me 42 dollars!".. I headed out the door and stopped at the nearest phone booth. I called my Dad.. I remember the conversation going like this: " I want to go to art school". My Dad's response was: " How long is this going to last."
The next call was to the Philadelphia College of Art. " Could I please speak with admissions".. Once I got on the line with a lady I asked," I want to go to art school. What do I need to do?" The response was,"Well you need a portfolio".. " What's a portfolio?".. And that was the beginning. After our meeting as to the suggestions of the admissions lady, I went directly to Foxes Bookseller on Walnut Street, and purchased DRAWING ON THE RIGHT SIDE OF HE BRAIN, Betty Edwards. The next ninety days were an epiphany!.. I drew ever night after a full day of construction work. After those ninety days I had ninety drawings. I marched back to the admissions lady one night after work, and dropped the stack of drawings in front of her.. She started leafing through them. I asked what do you think. And she replied "You'll get in".. "How do you know", I responded. She stopped, looked up at me, and said," Because I'm the director of admissions!"
I ended up at the best school in the country to learn how to draw and sculpt the figure in Renaissance manner. My teacher, Walter Erlebacher had studied at the Bauhaus school in Germany and at some point when he came to this country decided to re-invent a system of anatomy directly out of the 1500's except it was completely modern in it's ideology. I had asked on that October afternoon to become a  modern renaissance master, and the universe had responded..

What artists have most influenced your work? 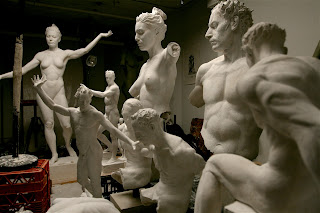 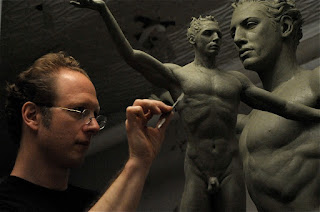 When I started making art, I always had books with me. Everywhere I went I had a book under my arm. I had every Michelangelo, and Leonardo book I could get my hands on. I aspired to make art at this level, and emulated these masters with a cult like persistence!... As years went by my own soul and experience started to creep in, and my greatest influence became the energy I had experienced as a child in Italy. I realized that I made art because I wanted to be elevated by the same feelings I had when I stood under the porticos in the piazzas of Torino holding my grandfathers hand. Looking up at the Baroque church steeples surrounded by an azure blue sky left it's imprint on me. Art is sacred to me and connects me to something way larger than myself. That's why I sculpt.