A Review of THE ART OF LIFE

The Art of Sabin Howard as Shared by Traci L. Slatton,
By
Grady Harp
This review is from: The Art of Life (Paperback)
In the event the reader does not know the name of Sabin Howard - yet - slowly absorbing this rather wondrous book, a collaboration between sculptor Howard and his wife, writer Traci L. Slatton will invade your psyche, not only because the art here reproduced so generously is so hypnotic, but also because of the team approach to the title THE ART OF LIFE simply works so well. According tot he requisite biographical data, Sabin Howard grew up in New York City and in Torino, Italy. He studied art at the Philadelphia College of Art and then earned his MFA from the New York Academy of Art. For twenty years, he taught at the graduate and undergraduate levels. He has been elected to the board of the National Sculpture Society. He has received numerous commissions and has showed his work at more than fifty solo and group shows. After 45,000 hours of working from life models in the studio, he is the creator of three heroic scale pieces, HERMES, APHRODITE, and APOLLO, as well as many smaller pieces. His works are owned by museums and private collectors all over the world, and they have been favorable reviewed by The New York Times, American Artist, Fine Arts Connoisseur, American Arts Collector, and The New Criterion, as well as several foreign journals. He is the author of the book THE ART OF LIFE with his wife author Traci L. Slatton.'

Of significant importance is not only the pleasure of seeing over 100 reproductions of Howard's art, in drawing form (he is an exquisite anatomist), plaster, clay, and bronze, but to hear the interplay between sculptor and writer explaining the history of the art of sculpture, the ties to the representational figurative art of the masters Michelangelo, Bernini, Canova, Donatello, Giambologna, and Rodin, in manifestation of the spirit of man as seen in the bronze reincarnation of the corporeal form, and in the seven chapters into which the book is arranged we are invited to explore A call to Beauty, The Foundation Supports everything, Education brings freedom, An Artist's body of work is his biography, The daily grind or process makes perfect, Living with sculptures, and Drawings.

As impressive as Sabin Howard's creations are the writings of Traci L. Slatton are equally rewarding. She is a fine writer (novels Immortal, Fallen, and The Botticelli Affair and a crossover between science and spirituality book entitled Piercing Time & Space. It is the collaboration of these tow fine artists that makes this book so appealing to a very large audience. Highly Recommended. Grady Harp, May 12 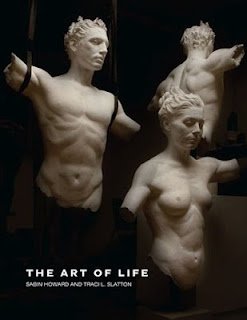