October 4, 2017 Permalink
Changing Things Historically
Last Thursday I flew back the 9,000 miles to New York City, taking a break from the green, windswept city of Wellington, New Zealand. I had completed the first part of the 3 meter-long sculpture maquette. It was a moment for me to reflect back on this pairing of digital technology and traditional drawing and sculpture. And I had that chance this week as I stood in front of an audience in the offices of Changing Our World (the principle fundraisers for the WWI Memorial) in Mid-Town Manhattan. 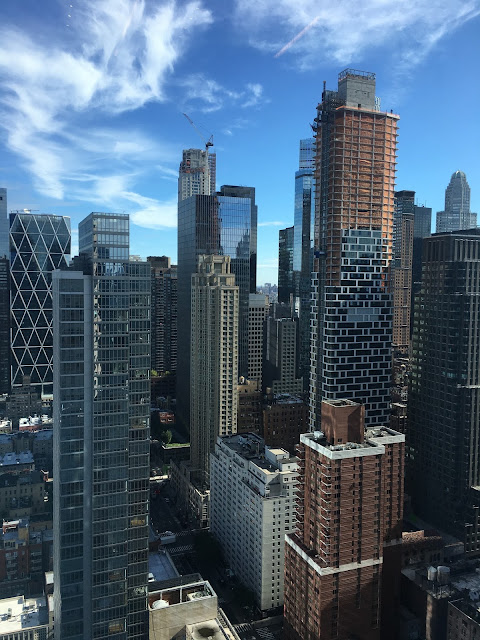 I had been asked to speak to the company about the WWI Memorial Project. And as I stood in front of the audience my thoughts about the alchemy created in this pairing of modern and traditional suddenly started coming out of my mouth in a very heartfelt way.  I spoke about my 30 plus years of working in clay to sculpt heroic figures. I spoke of Italy and the 50,000 hours that I had spent in front of life models in my studio to create those sculptures and drawings.  Without thinking, my words came out, and they carried a lot of emotion because I understood the finality of what I had just said. 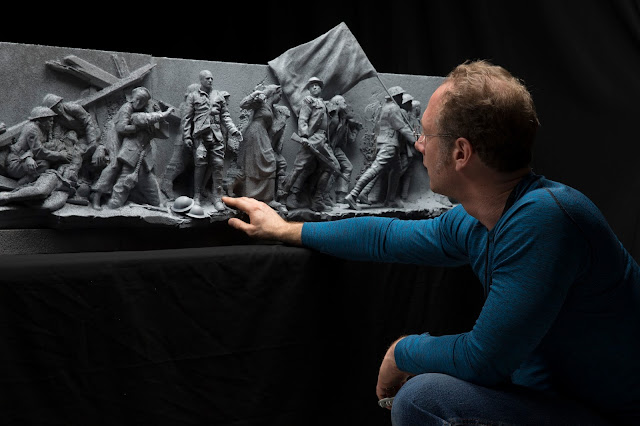 The significance of time in the creation of my art had changed. I would never go back to solely creating sculptures where the element of how long something took to make did not matter. I fully understood with a twinge of sadness, that that era was over. Even a few months ago I saw it as the end of my official sculpture training. That old door had closed. A new door had opened with this epic public project. There was a major deadline to meet. I would be creating Art in the Arena!
When I began work on this Memorial Project back in January of 2016, I was immediately so excited.  I wanted to share my passion with this group now. As I began my talk with this audience of 20 and 30 year-olds, I realised that they did not share that same excitement. There was a certain sense of disinterest as they slouched with cell phones in hand, checking their emails and messages. There certainly wasn’t a lot of electricity in the room. After all, I was speaking about a war that had happened 100 years ago, and memorials as of late have been underwhelming even on a good day. But as I began to tell them my story of growing up in New York City in the 60s and travelling to Italy, and how at age 19 I could not draw, and how one day I decided to become an artist, ears perked up.
And as I continued explaining what was happening in this project, an excitement started to creep in. Heads began to lift. Cell phones were put down and postures began to change. A charge had hit the room. All of a sudden everyone was sitting on the edge of their chair in rapt attention. They were witnessing, and being let in on, a huge secret that would blow the roof off the art world. They were witness to a historical change. This was the first group of people to see the 3 meter-long maquette outside of Weta Workshop in New Zealand. I was explaining what I had gone through to get here, how I had received a calling. I was letting them in on my journey. I spoke about how sculpture was once the visual medium to bring people together and tell a story, and how film had taken on that job today. And I explained, I was about to change that! 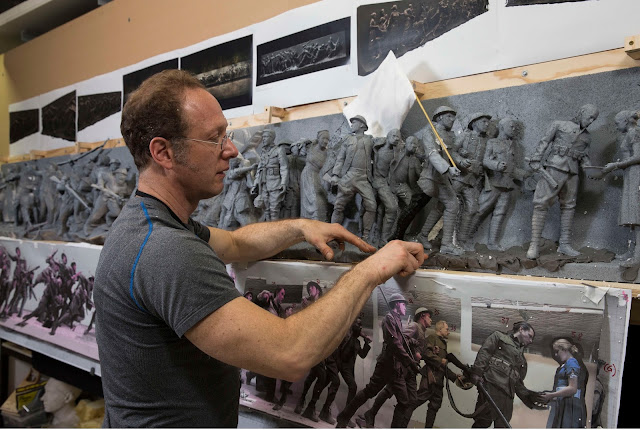 I had travelled to Wellington and discovered the warp speed that digital technology could afford an artist in his creative process. I knew as I stood in front of this group, that this relief wall would bring back the excitement and power that art once had for the general public. I felt like we were in a back room planning a revolution and this group of young 20 and 30-year-olds were privy to the "Visual Explosion" about to be launched. I talked about the correlation between my relief and film. How in film, as we sit there, the scenes change in front of us. I spoke about how in the future people would go visit the Memorial and as they travelled from one end to the other the scenes would change. Memorial visitors would become active observers receiving a spark from the past.  They would be sucked into the story and feel emotions about the characters that have travelled to those distant shores, and experienced the carnage. The witnessing of what WWI looks like as told through the relief would create feelings that would be a catharsis of sorts, very similar to what happens in movie theatres at the mall.

And this young generation of listeners understood that a true revolution is about to happen. They understood what is coming and what you will see at Pershing Park will be playing forward the rich and full tradition of figurative art in all its aesthetic power and glory. As Edwin Fountain, the Commissioner of the WWI Centennial Foundation says, “You will see a killer sculpture." All of a sudden, the audience carried that same excitement for the aesthetics of a bygone era. They saw my vision of bringing to life the emotions of film with the intensity of Michelangelo and the beauty of Leonardo. They were inspired by my vision of this aesthetic being reinvented to fit today’s world!
There was palpable excitement in the room as I told them this story of A  Soldier’s Journey.
The visitor will see the husband pulling away from his wife as she grabs his arm in fear of never seeing him again. They will see the soldier launching himself out of the trench with an animal aggression in his eyes. They will see the sadness of war as the nurse holds the gassed soldier in her arms.  And out of all this death and destruction they will feel the desperation of the father figure emerging out of the battle scene, staring directly out at you from the relief. For this is a visual narrative told in a three-dimensional material, bronze. It is a story of our humanity. Of how we are born, travel through our life, only to return at the end handing our experiences on to the next generation. 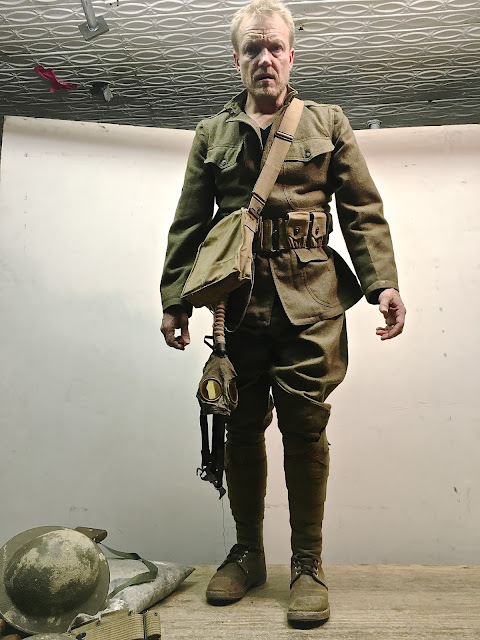 They saw how this art was a return to the visual. I explained how this relief breaks away from the ideology of post-modernism where the importance of the book about the art has superseded the art that it writes about. And they got it. 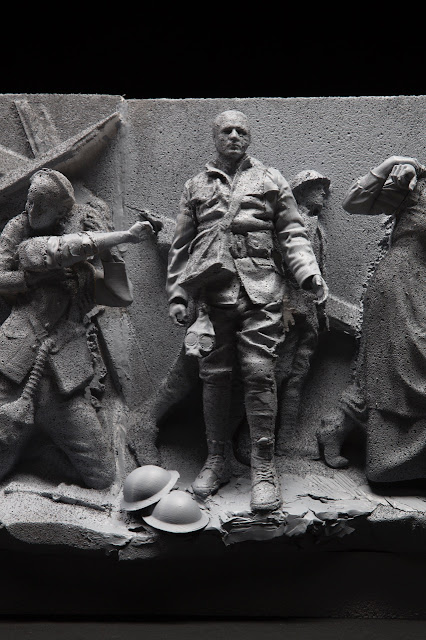 It was a moment that I will never forget. It was an acceptance from the younger generation. It is a generation that is not literate in the culture and esoteric values that I carry with me. When I began this project, I was determined to bridge the gap between this outdated tradition and imbue it with the excitement of the new. That is why I had flown to Weta Workshop to make use of this cutting-edge technology.  And as I stood there, I realised at that very moment that it was not the technology that was the answer. It was the vision that drove the technology, that allowed this aesthetic to be reborn.  The technology was just a tool. It was all about the artistic vision.
And it made me happy to know that what I cared about was also something of great value and importance to this younger generation. I left there with tremendous excitement knowing that when this relief wall materialises at Pershing Park, I will be able to change the direction of art history and put figurative art back on the map as the cutting-edge art. I will have given back to others with my life task of creating a contemporary Renaissance Art. And in so doing, I will make art vital again to the general public!
There is no stopping this now, it is coming on like a crashing wave on the beach.